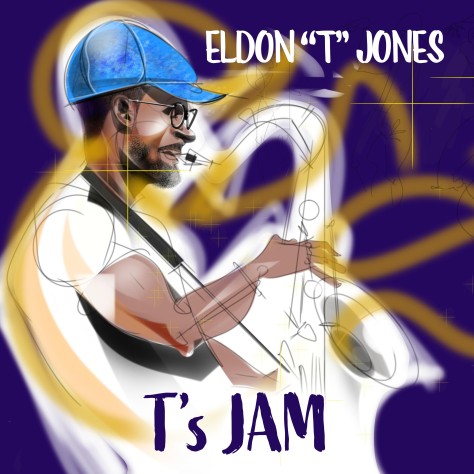 Saxophonist Eldon “T” Jones is one of Portland’s best saxophone players of jazz, gospel, and soul music. He began his music career by founding the N Touch band that played around Portland in the ’90s. He mentored and launched several of those musicians into long and fruitful music careers. Eldon continues to move hearts through his profoundly genuine playing at music festivals and premier jazz venues.

Eldon released “T’s Jam” as a single on October 25, 2021, and he’s elated to share it with the world because it captures the essence of his joyous personhood and musicality. Mixed by industry Midas Darren Rahn and promoted by Gorov Music Marketing, it’s a funky smooth jazz tune with a kick. The gospel organ lays the foundation before the band spirals into an all-out jam!

In 2015, Eldon contributed the song “Love Will Find a Way” to the Bespeak Love collaboration, which reached #1 on the UK Soul Chart and received airplay on smooth jazz stations worldwide. World Arts Foundation recognized Eldon’s music as a blessing to the community with a Lifetime Achievement Award at their Martin Luther King, Jr. Tribute in 2017. In 2018, the original N Touch members took the Alberta Rose Theatre stage for the sold-out crowd to relive an era. Eldon performed the music of his idol, Grover Washington, Jr. at PDX Jazz Festival in 2019 and took the show on the road to Bend, Oregon for three sold-out Jazz at the Oxford concerts in 2020.