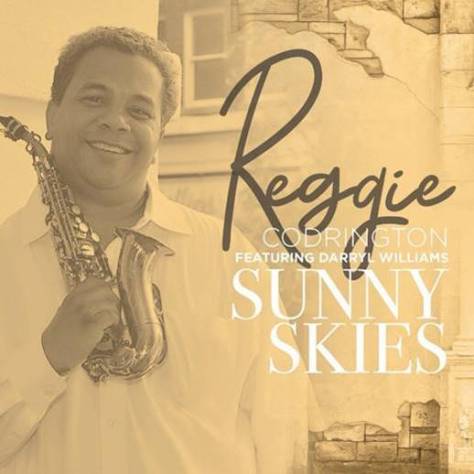 When the burden of caring for aging and ailing parents is added to the daily stresses and strains, sometimes simply seeing sunny skies is enough to help get through the day. That scenario is what inspired urban-jazz saxophonist Reggie Codrington’s new single, “Sunny Skies,” which he wrote with bassist-producer Darryl Williams. The hopeful mid-tempo R&B groove, mixed by hitmaker Euge Groove and going for playlist adds on August 12, features Codrington’s soulful soprano sax expressions and trumpet play from his 82-year-old father who is battling Alzheimer’s.

Afflicted with Ataxic Cerebral Palsy that required nine major surgeries even before he became a teenager, Codrington is returning the loving care he received from his parents, Joyce and Ray Codrington. The grind is a challenge physically and mentally, but the optimistic artist awakens each day seeking beauty and blessings in his life that put a smile on his face.

“The song (‘Sunny Skies’) makes me feel happy. I find beauty all around me, even in the rain. But seeing sunny skies makes me feel especially peaceful and happy. Blue skies make me feel close to nature. I’m a pretty simple guy. Life is complicated enough and so are all the things going on in life. Sunny skies keep me moving forward,” said Codrington.

After an intro from Codrington’s label, M.A.N.D.A.T.E Records, Codrington and Williams hooked up a few years ago at a jam session. Williams sent a track to the saxman who then wrote the buoyant melodies for “Sunny Skies.” With Williams programming the drum tracks, playing piccolo and synth basses and keyboards, Codrington emotes smilingly on a special curved horn designed to overcome his physical limitations. Guitarist Darrell Crooks, who has recorded with Grammy winners Eric Clapton, Boyz II Men, Ledisi, Gregory Porter and Kirk Whalum, adds rhythmic licks while Rymand Entezari contributes electric piano touches. Codrington gets emotional when talking about his father, who has played with Little Richard, Gladys Knight and Jackie Wilson, making a guest appearance on the single.

“Yeah, man, he’s an inspiration for me. It means a lot (to me) to have him on the record with all that he’s going through with Alzheimer’s. There’s great beauty in that as well as inspiration for me. Taking care of my parents as their health fails, I try to find the bright spots in each day to keep from feeling down. Everyone has got to find their own ways to get through the day. It could be as simple as looking up in the skies. Just seeing beautiful blue skies makes me feel like I can take on the world,” said the Fayetteville, North Carolina-based Codrington who studied music at Howard University.

Last year, Codrington dropped a single, “Cherry Sweet,” a song that sprang from helping his mother feel better by giving her cherries. It appeared on his “Against The Odds” disc, titled for the improbable story of how he overcome a rare disability and found a home in music. Ataxic Cerebral Palsy is the least common form of the disorder and is a chronic condition that affects movement and muscle coordination, sparking tremors and walking difficulties. Muscles were cut and transferred from his elbow, wrist and triceps to improve the functionality of his fingers. To make walking easier and enhance mobility, muscles were sliced from his legs. The curved sax enables him to play comfortably. Codrington has performed for President Barak Obama, recorded with Jeff Lorber, Paul Jackson Jr. and Nils, and opened for Ramsey Lewis, Charlie Wilson, Frankie Beverly & Maze, Peabo Bryson, Kenny Latimore, Kim Waters and Kevin Toney. He’s too modest to know what an inspiration he himself is for others.